A groom’s life: The work behind the Preakness 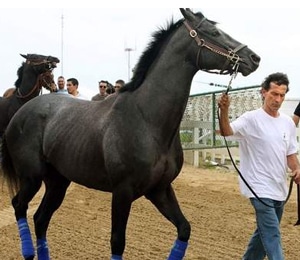 BALTIMORE — Maurice Sanchez wouldn’t be recognized by most of the racing fans who will gather Saturday at Pimlico Race Course or watch the Preakness on TV.

But those people certainly will see the product of his work: sleek, muscled thoroughbreds schooled to athletic perfection.

The hard work of preparing Preakness contenders — the feeding, cleaning, doting — is the work of people like the Colombian-born Sanchez.

His Thursday work session began at 3:30 a.m. at the Preakness barn, where he was set to feed Mylute. He arrived to find the horse still asleep and snoring.

Sanchez went to a small storage area, leaving the horse to slumber. When Mylute awoke Sanchez fed the horse and cleaned out the soiled bedding.

Sanchez is an exercise rider for Mylute trainer Tom Amoss at Churchill Downs. He flew with the horse to Baltimore to do double duty: gallop Mylute and work as groom, which was his previous job some 30 years back when he broke into the business.

At 3:30 a.m. the only light around the barn and stalls came from the cellphones of trainers, grooms and exercise riders. A small fan blew cool, pre-dawn air into Mylute’s stall, sending bits of fresh straw bedding up off the ground.

Sanchez wore blue jeans and a T-shirt. He took measured steps as he worked, pacing himself through the start of a work day that he knew would stretch past 5 p.m.

He moved slowly around the horses, careful not to startle the big animals, which frighten easily and could crush a human being.

Sanchez’s thick black hair rested on his head in lobbing curls, a few gray strands coming through. His face was tanned and lined from long hours in the sun.

He smiled when he talked about Mylute, explaining the pleasure it is to ride, exercise and care for him. But when he worked the smile faded, and concentration took over.

When sunlight peeked over the horizon, Sanchez slipped a short blanket over Mylute’s back and tied a saddle barely big enough to hold a child. Todd Quast, manager of GoldMark Farm in Ocala, stood by the stall with GoldMark owner Paul Bulmahn, who owns a piece of Mylute. Amoss is gone with his family, and Quast is filling in.

“I didn’t want to do this (my whole life), but here I am,” Sanchez said during a break. “But, then again, the Lord smiles. It works.”

At 6 a.m., Sanchez strapped a padded vest around his torso and climbed aboard Mylute, ready for a brisk gallop.

Once the brief ride was over, Sanchez pealed the blanket and saddle off the horse and stored the leather gear back in the tack room. Sanchez handed over the horse to Quast, who walked him about the barn, giving Sanchez time to put away his riding gear and resume his role of groom.

A dozen photographers pointed their oversized lenses at Mylute, even though he is not the favorite in Saturday’s race. That distinction goes to Kentucky Derby winner Orb.

Sanchez sponged down his horse, and in no time the animal was soaked and dripping with soap. There was water all around the barn as other grooms carried out the same morning ritual with their rides.

Sanchez’s father was in the Colombian military and rode dressage and hunter/jumpers professionally. The family came to America when Sanchez was 3. His father made a modest living buying thoroughbred race horses that could no longer compete, retraining them to be jumpers, and then selling them for a profit.

A couple times a month, Sanchez and his brother and father would go to racetracks to find those unwanted horse. It was a hard life, Sanchez recalled, because sometimes his father couldn’t find clients for his horses. Still, he supported his wife and five children.

It was a business Sanchez wanted no part of. He knew the financial risks.

As a boy, before school started in the morning, Sanchez would ride his father’s horses, helping with the conversion from racers to jumpers.

“We got to hang around with Pop,” Sanchez recalled, referring to his father. “Not many kids get to do that.”

Although his father pushed him to get an education, Sanchez dropped out of school at 16 and became a groom. Later he earned his high school equivalency.

The groom work was hard and the hours long, but he followed his bosses’ orders and stayed out of trouble. While working in Arkansas, he became an exercise rider. About 1990 he started working for Amoss, was getting horses to race from GoldMark Farm in Ocala. He has worked for Amoss ever since.

A 1:30 p.m. Thursday, Sanchez took Mylute to the paddock. That is where he will get saddled for jockey Rosie Napravnik on Saturday. The early trip to the paddock was designed to get the horse familiar with the surroundings.

The airplane that brought Mylute and other horses to Maryland had room for only one human per horse. So Sanchez is shorthanded. Quast fills in as a “hot walker” for Mylute, holding him while Sanchez does his work.

“I don’t ask anyone to do something I wouldn’t do myself,” Quast said, standing later by Mylute’s stall.

Like Sanchez, he is at the barn before daylight and in bed no earlier than 10 p.m.

After the paddock round-trip, Sanchez bathed Mylute once again, like a doting parent.

His hours are easier back in Kentucky. He’s at the track at 4 a.m., exercises eight or nine horses, and finishes by noon. Then he takes a nap. Race weeks, of course, are different.

Mylute has the second best morning-line odds at 5-1, better than Quast expected. Sanchez doesn’t feel slighted that most of the media attention is on Kentucky Derby winner Orb.

“That’s all right with me,” Sanchez said, sitting on a bench by his barn. “We’re under the radar and no one messes with us.”

Sanchez’s work is physically demanding. He has the mended bones and twisted fingers to prove it. Stirrups give way; horses rear; riders go down. It’s the nature of the work.

Despite that, Sanchez wouldn’t trade his job for some 8-to-5 shift behind a desk.

Mylute finished fifth out of 19 in the Kentucky Derby. Even if the horse wins on Saturday, Sanchez knows he won’t be any more recognized then than he is now.

His days will still begin before dawn, when racing fans are asleep, mostly oblivious to the work that goes on before they find their seats in the stands or the right channel on TV.

“That’s OK with me,” Sanchez said. A good showing on Saturday, he said, will serve as his “pat on the back.”

Then Sanchez lifted himself off a bench by his barn and got back to work, packing ice around Mylute’s feet and removing ankle wrappings. He was smiling as he walked away.
[button link=”http://www.ocala.com/article/20130517/ARTICLES/130519765″ color=”silver” window=”yes”]Article Source[/button]