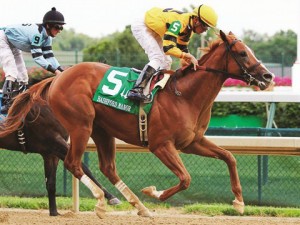 LOUISVILLE, Ky. — Two was the prominent number as the field was set for the Kentucky Derby.

Two horses dropped out minutes before the Wednesday morning entry deadline for Saturday’s 1 1/4-mile race. Sunland Derby winner Endorsement broke his right front ankle after his workout and may have surgery Thursday. Trainer Todd Pletcher opted not to run Interactif.

That opened the door for Backtalk and Make Music for Me to move into the final two spots in the full 20-horse field.

There were 22 horses entered, but Pleasant Prince and Setsuko didn’t get in because they didn’t have enough graded stakes earnings.

Two Derby horses will run with blinker changes. Lookin At Lucky, the 3-1 favorite, won’t wear the vision-restricting hood while the filly Devil May Care will add blinkers.

Of the two defections, Endorsement was the most surprising.

Trainer Shannon Ritter, aboard for the drill, knew something was wrong as the horse walked back to the barn.

“I didn’t even notice it right away until we had been further down the road walking,” said Ritter, denied a chance to become the first female trainer of a Derby winner. That opportunity now goes Alexis Barba whose Make Music for Me joined the field.

Pletcher had said for several days that Interactif was doubtful for the Derby. He ended the suspense with an announcement that the colt would be pointed to turf races in the future.

“I think he’s a little better on the grass,” Pletcher said. “Even though he trained well here, I just felt that a mile-and-a-quarter on the dirt is not his specialty.”

With rain in the Derby Day forecast, Pletcher had toyed with using Interactif as his Derby mudder.

“Even though it looks like he likes a wet track, we felt it was in his best interest to wait,” he said.