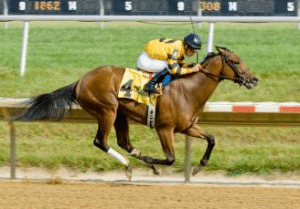 Delta Downs in Vinton, La., opens an 88-date meet Friday night, beginning the countdown for its biggest card of the season, the $2.2 million Jackpot program of eight stakes on Nov. 17. Preps for the card’s richest offerings, the Grade 3, $1 million Delta Downs Jackpot and Grade 3, $500,000 Delta Downs Princess, are being held over opening weekend, starting with Friday night’s $150,000 My Trusty Cat. Saturday night, the $200,000 Jean Lafitte will feature an appearance by Grade 2 Sanford winner Bern Identity.

Delta, which is home to a casino housing more than 1,600 slot machines, will race through March  23. The track will offer 32 stakes worth more than $4.5  million this season, while purses are budgeted to average $240,000 a program, said Chris Warren, director of racing for Delta. Highlights of the meet include the $1 million Louisiana Premiere Night of 10 divisional stakes for Louisiana-breds Feb. 2. In addition, Delta has renamed one of its races for Big Drama, the retired champion sprinter who won the Jackpot in 2008. The $100,000 Big Drama is for 3-year-olds at seven furlongs Jan. 5.

But the centerpiece of the meet remains the Jackpot, a 1 1/16-mile race for 2-year-olds that with its first-place check of $600,000 in graded earnings had long secured its winner a spot in the starting gate for the Kentucky Derby if oversubscribed. But in a change for next year’s Kentucky Derby, a new points system will determine preference in a program being administered by Churchill Downs. The Jackpot is listed as part of the “Kentucky Derby prep season,” with the winner to receive 10 points toward the Kentucky Derby, the runner-up 4, the third-place finisher 2, and the fourth-place finisher 1.

“We’re still fortunate and happy to have some recognition for horses that come run here as far as points for the Kentucky Derby,” Warren said. “Of course, we feel the race merits more points because it’s the second-richest 2-year-old race in the United States on dirt.”

The Delta Princess, meanwhile, will be part of the “Kentucky Oaks prep season” that also is using a points system for 2013. Delta on Friday night runs its prep for the one-mile Princess, the My Trusty Cat at seven furlongs. The field of 10 for the two-turn race includes Madame Cactus, a maiden special weight winner at Santa Anita; Ile St. Molly, who popped a Beyer Speed Figure of 87 winning her debut wire to wire in the $50,000 Lady Razorback at Louisiana Downs; and Promise Me More and Miss Goodthing, who also won stakes this past fall at Louisiana Downs.

Cayllano won the $50,000 White Clay Creek, a 5  1/2-furlong overnight stakes at Delaware Park in July. In her most recent start Aug. 12, she was fourth in the Grade 2 Adirondack, finishing seven lengths behind winner Kauai Katie in the sprint run at Saratoga. Cayllano has shipped to Delta from Churchill Downs for Gold Mark Farm and trainer Tom Amoss.

“After the Saratoga race, she acted like she needed a little breather mentally,” Amoss said. “We thought the Delta Downs race was a good race back to see if she can handle two turns or not.”

Amoss said Cayllano will add blinkers for the My Trusty Cat. She breaks from post 3 under Gerard Melancon, a multiple title winner at Delta. “Blinkers on would suggest she will be prominent, but looking at the race there is a lot of speed in there,” Amoss said.

“We’ve added new material to the track and did a lot of work on it to give more of a bounce to the surface,” Warren said.

Warren said Delta’s stable area of 1,200 stalls is close to filled, with the new stables including trainer Gennadi Dorochenko, who won the Louisiana Derby this year with Hero of Order.

Warren said Delta will add a pick five on the final five races of each card to its wagering format. He also said the track will again offer a $100,000-guaranteed, all-stakes pick four for the Jackpot card, which will have a special daytime post of 1:15  p.m. Central.