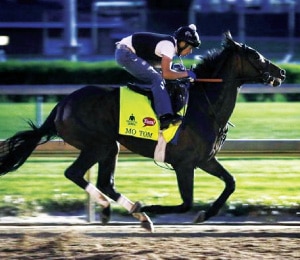 Last time out: For the second straight race, jockey Corey Lanerie guided Mo Tom up the rail and into unforeseen trouble in the March 26 Louisiana Derby. The late runner nearly collided with a tiring horse, and he did make contact two starts back in another race at Fair Grounds, the Risen Star.

Running style: Connections are fond of advertising Mo Tom’s closing speed. He hasn’t been able to fully showcase it since winning Fair Grounds’ Grade III Lecomte. At 2, the colt notched a win at Churchill, topping Tom’s Ready in the $80,000 Street Sense Stakes.

What to know: Tom’s Ready, the other GMB Racing entry in the Derby, is trained by Dallas Stewart. He, Amoss and Al Stall, all regular Louisiana conditioners, were selected by the Bensons to purchase and get horses to the races. The stable beat the odds by landing two in the first leg of the Triple Crown.

In their words: “I’m not going to play the game of where we might have run if we didn’t encounter the trouble that we encountered in the Louisiana Derby,” Amoss said. “I’ll simply tell you that my horse has a devastating late run, and he’s yet to be able to use it in his last two starts. I’m looking forward to getting that chance on the first Saturday in May.”