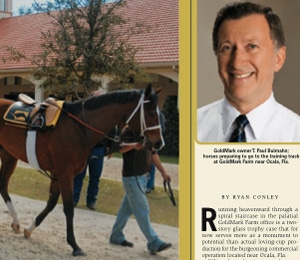 now serves more as a monument to potential than actual loving-cup production for the burgeoning commercial operation located near Ocala, Fla.

“I told Todd, ‘No pressure,’ ” said Bulmahn with a laugh when asked about the trophy case-in-waiting.

But neither Bulmahn nor Quast kids around about the kind of horses they want coming off the 2,500-acre farm they are developing west of Ocala.

“I really cut my teeth with the Kentucky Derby and watching it on television when it was in black and white,” said Bulmahn, who was raised in rural northeast Indiana. “And that’s the level I want not only for myself, but for the owners we service as well.”

And Quast, who includes on his resume ́ a lengthy tour of duty in the unofficial trainers’ school of Hall of Fame conditioner D. Wayne Lukas, said competing in graded stakes was on Bulmahn’s radar from the first time the two met in 2002.

“That’s the intent,” said Quast, who along with his wife, Lori, helps select the 25 or so yearlings GoldMark purchases annually at auction. “Our goal is to compete at the top level at the best tracks with the best horses.” GoldMark Farm received quick affirmation on those lofty standards from its first group of purchased yearlings when Elusive Lady, a $90,000 buy at the 2006 Keeneland September yearling sale, won the 2007 Tempted Stakes (gr. III) at Aqueduct in just her third start. The daughter of Van Nistelrooy—Song of Royalty, by Unbridled’s Song, went on to make the field for last year’s Kentucky Oaks (gr. I) but was scratched on race day when conditions turned sloppy.

“He selected a horse from the first crop that got all the way to the Kentucky Oaks,” said Bulmahn of Quast. “That really underscores Todd’s value to our operation.”

The GoldMark operation was seeded by Bulmahn’s visit to the 2002 Kentucky Derby (gr. I) won by War Emblem, a trip fostered by the success of ATP Oil & Gas, which he founded in Texas in 1991. Bulmahn journeyed to Kentucky in 2001 to accept an award for ATP, which had been honored by Inc. magazine as the fifth fastest-growing company for 2000. While in the Blue Grass State, Bulmahn, as part of a day trip connected to the awards ceremony, visited the Maker’s Mark distillery, where he entered and won a trip to the 2002 Derby. “That was just a fabulous experience for me,” said Bulmahn, who, along with his late wife, Mary, enjoyed Derby doings with Maker’s Mark owner Bill Samuels and his wife, Nancy. “And from that experience then, my desire to be around horses, and Thoroughbreds particularly, was really kindled.”

The ensuing farm name Bulmahn chose carries a legacy, in part, to the impact of the trip that propelled him into the Thoroughbred business. “ ‘Gold,’ because it is the highest award in the Olympics, and ‘Mark’ is what I borrowed from Maker’s Mark,” Bulmahn said. “I kind of wanted to have a tribute to that experience with Bill and Nancy Samuels.”

A few months after the 2002 Derby, Bulmahn put his new passion into practice by purchasing Stanley Ersoff’s former Triple EEE Farm. Since then, Bulmahn has added more property, and he and Quast have teamed to produce arguably one of the top training facilities in Florida, if not the United States.

Included is a 142-stall barn area that is geared for both optimum workflow performance and climate control in the hot—and sometimes wet—Central Florida summers.

“Everything is close,” said Quast, who collaborated with Bulmahn on the design of GoldMark. “When the horses come in, you’re not wasting time. It’s got a nice flow. Not a lot of wasted motion. You can spend as much time as you can with the horses.” And the three-quarter-mile training track is GoldMark’s pride and joy, topped by a Safetrack synthetic surface. “If it isn’t the best synthetic surface around, I don’t know what could be better,” Bulmahn said. “It uses more elastic and a higher grade of wax than many of the other tracks, and it also doesn’t have an asphalt base. It utilizes a geo-textile membrane. In matters of drainage and cushion, it has big advantages over what some employ.”

Quast said he researched all available forms of synthetic surfaces before recommending Safetrack. The resulting surface, which was tweaked to GoldMark specifications and opened for training in 2006, has produced the most consistent, level, and maintenance-free training track Quast has ever seen.

“You have the exact same racetrack every day,” said Quast, who typically supervises the training of 120 young horses, about 90 of which are for outside clients.

Quast said the track’s drainage system, which has dogged other racetracks with synthetic surfaces, was tested by a dawdling 2008 hurricane that dumped 14 inches of rain on the Ocala area in a 24-hour period. “We haven’t had that much rain in a two-year time frame,” he said. “And we were not only able to gallop the next day, we were able to breeze.”

The Safetrack surface isn’t just restricted to the training track— it also covers most ground areas of the complex. “We not only put it here,” Quast said of the track, “but you see it everywhere: It’s in the lanes; it’s in the arenas. In the shedrow, it’s never dusty… it’s great for the horses because you don’t have respiratory issues. And it’s great on their feet. It gives a lot of cushion to the horses, and to the people.”

That’s high praise from a horseman who toiled on dirt surfaces for 10-plus years under Lukas, first at the trainer’s for- mer Westerly Training Center in California, then briefly as an assistant track trainer handling Lukas’ Hollywood Park string, and finally, at the former Padua Stables in Summerfield, Fla., where Lukas was once director of operations.

Along the way, Quast was instrumental in the early training of such champions or classic winners as Flanders, Boston Harbor, Timber Country, Thunder Gulch, Grindstone, and Charismatic, the latter three all Kentucky Derby winners.

But Quast, who earned degrees in agricultural business and horse production and management at Tarleton State University in Texas, said he easily bought into Bulmahn’s edict for both quality and safety.

“He doesn’t have a horse background, per se, but his whole objective is to do whatever is best for the horse,” Quast said. “Whatever we can come up with from de- sign of the barn, or the track, everything is done for what’s best for the horse.”

Prominent clients have flocked to Gold- Mark, including some that followed Quast from his Lukas days. In the barns are young horses and/or layups for Overbrook Farm, Eaton Sales, Gainesway Farm, Three Chimneys Farm, IEAH Stables, and Team Valor, among others.

Overbrook Farm’s decision to send some of its yearlings to Bulmahn’s facility is based on reasons both past and present, farm racing manager Chris Young said.

“There are two main factors; one was Todd’s ability as a horseman,” said Young, noting Overbrook’s association with Quast from his days with Lukas. “Secondarily is the facility in general and the main- tenance of the track surface.”

Young, who also sends some yearlings to Bryan and Holley Rice’s Woodside Ranch near Ocala, acknowledged the jury is still out on synthetic surfaces. “Are they all better than dirt tracks? Probably not,” he said. But he feels the Safetrack surface at GoldMark is a solid choice until proven otherwise.

“(Keegan) had nice things to say about the farm, the people, and the facility,” said Michael Sherack, IEAH’s vice president of investor relations. “When it came time to send a few yearlings out, we gave it a shot. Other people have given it great reviews— they have nice horses for top clients; it’s got a reputation as the best facility (in Florida).”

Sherack said Quast has been great to deal with. “He keeps us up to speed— that’s the main thing with young horses,” he said. “You want someone that is shooting straight with you, not being told a horse is a champ when he’s not, or not hearing about an injury.” Bulmahn said from the onset he treated GoldMark Farm like any other business, so treating his clients well is a priority. “From the very beginning, I wanted to have a state-of-the-art training facility that others would appreciate, and I love just being around horses,” he said. “And they don’t have to be my horses for me to love them. We’ve had some very successful horses come off the farm already, and I am excited and ecstatic about each of their performance records.” Bulmahn, whose publicly traded energy company develops offshore oil and natural gas properties in the Gulf of Mexico and Europe’s North Sea, sees similarities in his two vocations.

“First, you need large amounts of capital to get things started,” said Bulmahn, who has spent about $11 million on the 70 or so yearlings he purchased from 2006-08, according to The Blood Horse research. “And it takes several years per project in developing offshore. Onshore, you can get wells drilled faster, but in the offshore, you have long construction lead times.

“And with horses, you have a period of time in development, where you need to break to saddle, get them used to being an athlete, training on the track, and then graduate to the racetrack. There are long lead times, and similarities in risk that have to be addressed. And risks that have to be overcome.” Bulmahn and Quast both subscribe to the “you’re only as good as the people under you” business axiom. Bulmahn, who said until recently he conducted every employee interview for ATP Oil & Gas, regardless of position, puts his trust in Quast to hire the right mix of workers. “In the Thoroughbred industry, just as with the oil and gas business, you live and die with your people,” said Bulmahn.

In addition to Lori Quast and Keegan, Todd Quast counts on farm foremen Ricardo Gonzalez and Alonso Pena to keep the average of 50 employees and 120 horses moving as a unit. “They make us all look good,” Quast said with a smile.

One of the perks for the employees is the use of an all-purpose room on the second floor of the trackside clocking stand, which also includes a two bedroom guest quarters on the first floor. The second floor features a barbecue stand and two large-screen televisions.

“It gives them the opportunity to see what they are working for,” Quast said. “It really pays for itself in the long run.” For now GoldMark Farm will primarily remain a training center.

“Eventually, we will have broodmares and probably stallions, but they are going to be developed through the race program,” Quast said. “If they do well and we don’t sell them— the original plan is to sell them—then they will become part of the broodmare band. If