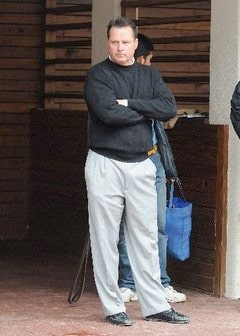 LOUISVILLE, KY. — Backtalk is in.

After a few days of wondering if Backtalk would draw into the Kentucky Derby field, trainer Tom Amoss, a New Orleanian, learned Wednesday morning he’ll be running the colt in the race Saturday after all.

Endorsement was withdrawn from the Derby because of an ankle injury detected by trainer Shannon Ritter after a workout Wednesday. Interactif, trained by Todd Pletcher, wasn’t entered.

Amoss said he’s excited about the chance to run Backtalk.

Before the Kentucky Derby last year, Amoss said Wednesday, jockey Calvin Borel asked Amoss what he knew about Mine That Bird. The conversation came shortly after Borel’s agent, Jerry Hissam, had lined up the mount, Amoss said.

Amoss said he’s adopting a similar attitude about Backtalk, whose morning-line odds are 50-1. Mine That Bird’s odds were 50-1 when Borel rode him to victory last year.

“He’s had a great couple of weeks, ” he said. “It actually falls the right way. We’ve never changed our plan. He’s always trained as if he’s going to be in the race.”

Backtalk, who has won four of seven starts, won two graded races, both sprints, last year. This year he won a minor stakes race at Delta Downs and finished a distant third in the Illinois Derby. He’s 2-for-2 at Churchill Downs.

“We were thrilled with his work, ” said Bill Casner, co-owner of WinStar Farm, which owns Endorsement. “Shannon had her feet on the dashboard. She came off the track beaming. … It all went down hill from there. …

“Shannon has lived with this horse. This is the best horse she’s ever had. She’s done such an extraordinary job with this horse. It was a devastating event, and I’m sure it was heartbreaking for her.”

Ritter said: “He worked beautifully, and I didn’t notice anything until we were walking back to the barn.”

INTERACTIF’S WITHDRAWAL: On why Interactif wasn’t entered, Pletcher said: “He’s a really nice colt, but I don’t think he’s up to a mile-and-a-quarter on dirt right now.”

EQUIPMENT CHANGES FOR DERBY: The filly Devil May Care will be racing with blinkers for the first time, and favorite Lookin at Lucky won’t be wearing blinkers after wearing them in his past two races.

Pletcher, who trains Devil May Care, said he has been considering putting blinkers on her since she won the Bonnie Miss in her last start. “When she made the lead that day, she started easing up and looking around, ” he said. “We’ve been training her in them since, and now it has become a no-brainer. It will help her focus.”

Explaining why Lookin at Lucky won’t run in blinkers, trainer Bob Baffert said: “One thing I noticed about the blinkers, he wasn’t breaking well. He was getting a little stirred up behind the gate.”

HE SAID IT: “You can get a brutal trip from any post position. Too much is made of it.” — Pletcher, who is running Louisiana Derby winner Mission Impazible, Risen Star winner Discreetly Mine, Super Saver and Devil May Care in the Derby.

ODDS AND ENDS: Besides Albarado, Louisiana-born riders in this Derby are Calvin Borel (Super Saver), Kent Desormeaux (Paddy O’Prado) and Joe Talamo (Sidney’s Candy). … This is the sixth consecutive Derby in which 20 horses were entered. Last year, 19 ran because I Want Revenge was scratched on race day. … The No. 1 post position has produced the most Derby winners (12), but a horse hasn’t won the Derby from that starting spot since Ferdinand in 1986.