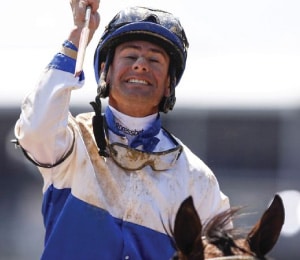 Churchill Downs’ leading jockey in eight straight meets will get a second chance at the Kentucky Derby.

Owner G.M.B. Racing announced Friday morning that Corey Lanerie has retained the mount on Mo Tom after lightning essentially struck twice on the Derby trail. In both Fair Grounds’ Risen Star and Louisiana Derby, Lanerie guided the late-kicking colt along the rail only to be slowed by a tiring rival.

Finishes of third and fourth made it so a horse with multiple stakes wins, including one at Churchill Downs, went into the week 21st in Derby qualifying points. Bob Baffert-trained Cupid’s defection put Mo Tom in the field, plus led to an official decision on his rider.

“We are very confident — very confident — that Corey will ride his race and turn the page and do what he does so successfully at Churchill Downs year in and year out,” said Greg Bensel, who manages G.M.B. for Gayle and Tom Benson, the husband-wife duo that also owns the New Orleans Saints and Pelicans.

“And let’s not forget one component,” Bensel added. “This is about Mo Tom. He is working great in the mornings, doing everything (trainer) Tom Amoss asks, and he deserves this careful consideration of who will ride him.”

Lanerie has one previous Derby start, in 2014 with Harry’s Holiday, a locally owned contender that finished 16th behind California Chrome. While unsuccessful in the track’s biggest race, Lanerie is Churchill’s top day-to-day rider who swept last year’s spring, September and fall titles to give himself 10 overall. Only Pat Day (34) and Don Brumfeld (12) have led jockeys more times under the Twin Spires.

Known for ground-saving trips, Lanerie took plenty of heat for trips in Mo Tom’s last two races. But before that, he also guided the son of Uncle Mo to wins in Churchill Downs’ Street Sense Stakes and Fair Grounds’ Lecomte. Tom’s Ready, G.M.B.’s other Derby entry, finished second in both those races.

Lanerie, 41, said after trouble in the Louisiana Derby that, “I doubt they’ll let me sit on him again.” Amoss added, “There were other choices and I don’t understand why he did what he did. Watching this was like going to the schoolyard and watching your kid get beat up by another kid.”

But Bensel and Amoss continued to evaluate the situation with the Bensons.

With Mo Tom back in the prospective Derby field, they came to a decision Friday, one that gives the assignment to a jockey fond of saying, “I know Churchill better than anybody.”

Lanerie will also ride Keeneland’s upset Grade I Ashland Stakes winner, Weep No More, in the May 6 Kentucky Oaks. The Louisiana native, one who now calls Louisville home, ranks 19th this year in earnings with mounts having made more than $2.2 million. He has won at a 13 percent clip and hit the board in 35 percent of his 360 races.