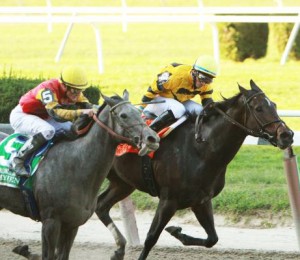 Florida Thoroughbred Breeders’ and Owners’ Association News
By Nick Fortuna
September 29, 2009
The folks at GoldMark Farm in Ocala had a reason to celebrate Sunday after Moontune Missy earned her first stakes victory and her second straight win overall in the $66,750 Sometime Thing Stakes at Belmont Park.

The Thoroughbred filly ran just off the pace in the middle of the pack early in the six-furlong sprint, which was run on a sloppy, sealed track. With Alan Garcia aboard for the first time, the filly made a four-wide move around the turn to find running room and went on to grab the lead in the final 20 yards.

Moontune Missy finished half a length ahead of Cuvee Uncorked in 1:11.45.

“She was very gritty,” said Todd Quast, GoldMark’s farm manager. “The thing about this filly is that she’s very tenacious and will take the battle to them. She’s very honest and very game, and we’re happy with her.”

GoldMark purchased Moontune Missy, a Kentucky-bred daughter of Forest Wildcat, for $150,000 as a yearling at Keeneland in September 2007. The filly, trained by Eoin Harty, has won three of her five starts for $98,050.

Moontune Missy finished sixth in her career debut at Del Mar in August 2008 but broke her maiden in her second try, capturing a $46,000 maiden special weight race by 1 ½ lengths at Santa Anita in October.

She concluded her juvenile season by making her stakes debut in the $111,100 Moccasin Stakes at Hollywood Park in November, but she couldn’t overcome the far-outside No. 11 post position and finished well behind the winner, Evita Argentina. Moontune Missy chipped a knee in that race and returned to the Ocala farm to recuperate.

Moontune Missy began her sophomore campaign with a 1 ½-length victory in a $52,000 allowance at Saratoga in August, her first race on dirt after three starts on California’s synthetic tracks. She led from start to finish in that six-furlong test and earned a career-best 93 Beyer Speed Figure.

Though the filly is 2-for-2 on dirt, Quast said he thinks she can run just about anywhere. Moontune Missy might make her next start Oct. 24 on Keeneland’s synthetic surface in the $300,000 Lexus Raven Run Stakes (G2), a seven-furlong test for sophomore fillies.

“The good racehorses that I’ve seen don’t have to take their track with them, and she seems to be one of those,” Quast said. “She’s a stakes winner now, and she has every right to improve.”