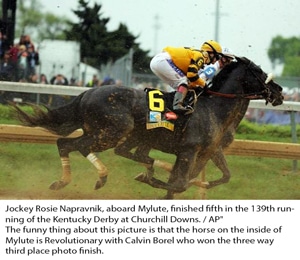 LOUISVILLE, KY. — After showering in the jockey’s room for women at Churchill Downs, Rosie Napravnik traded her mud-caked riding garb for a rose red dress and a big-brimmed, black Kentucky Derby hat. She wasn’t dressed for a victory party, but she had distinguished herself.

Napravnik, 25, bidding to become the first female jockey to win the Kentucky Derby, finished in fifth place on Mylute in the 19-horse field in Saturday’s 139th running of the Derby. The previous best finish by a female jockey in the Derby had been Napravnik’s ninth place in 2011 aboard Pants on Fire.

It was just the eighth start by a female jockey in the Derby. Napravnik now has matched Julie Krone (14th in 1992 and 11th in 1995) with two starts.

“If I moved four places from two years ago to this year, then …’’ said Napravnik, her voice trailing off as she did the math in her head for another four-place jump that would put her first the next time.

“It was really exciting. I was excited to have the best finish by a female,’’ said Napravnik, who last year became the first female jockey to win the Kentucky Oaks for 3-year-old fillies on the Friday before the Derby.

“We really stepped it up this year. The most exciting thing is about this horse and how well he ran today. I had a really wide trip (after starting in the No. 6 position). He’s very talented. He is really for these classic distance races. And I’m really excited. He’s really growing into a very nice race horse.’’

Earlier this year, Napravnik was riding Shanghai Bobby, who had been a star as a 2-year-old and might have been the favorite in the Derby. But after Shanghai Bobby was sidelined by a stress fracture in his hip, Napravnik switched to Mylute, who went off in the Derby at 14-1. She had ridden Mylute to a previous victory in an allowance race.

“I couldn’t have been more happy, well, I guess I could have been more pleased today,’’ she said with a smile. “But I was really pleased with the way he ran.’’

Napravnik, who started riding when she raced ponies as a youngster in New Jersey, said she followed the race plan from trainer Tom Amoss.

“My instructions from Tom were just let him fall out (out of the gate) and run the way he likes to run, which is from behind,’’ said Napravnik.

“He’s always kind of just very relaxed. He stood in the gate like a statue, which I was thankful for. I was a little bit further back than I anticipated going into the first turn. But Orb, I mean I could have touched him the whole way around there.

“So we got a pretty good trip other than going wide. A lot of times that’s the winning move. And obviously today it was Orb’s.’’

Of course, Napravnik was the lone female rider in the Derby.

“I have never wanted to win a photo (finish) for third so bad in my life,’’ she said.