Nicks Goes 5-For-5 With Apprentice Gaffalione At Gulfstream 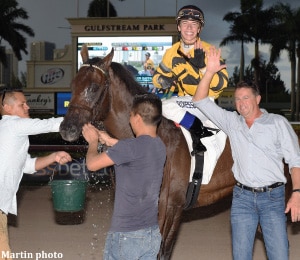 Trainer Ralph Nicks saddled five horses on Sunday’s 11-race program at Gulfstream Park in Hallandale, Fla., and all five found their way to the winner’s circle under jockey Tyler Gaffalione.

Led by a quartet of 2-year-olds, Nicks captured the fifth, seventh, eighth, ninth and 11th races – five of the last seven races – with horses all ridden by Gaffalione, the apprentice and current meet-leading rider.

Nicks could only describe the day as “surreal.”

The day began in the fifth race with a debut score by Bridlewood Farm’s Washington’s Song in a five-furlong maiden race on the grass. The daughter of Unbridled’s Song and the Grade 2 winning mare Washington Bridge ($5.40) unleashed an eye-opening move around the far turn before driving to a 1 ¾-length victory.

Starting in the seventh, Nicks would saddle three consecutive winners – Whisper Hill Farm’s L. A. Style ($8.00) in a mile claimer on the turf, Bradley Thoroughbreds’ 2-year-old Final Encore ($7.20) in a 5 ½ furlong maiden special weight event, and Donald Dizney’s More Royalty ($3.20) in an entry-level allowance event at 5 furlongs on the turf.

Nicks and Gaffalione ended the day with GoldMark Farm’s Sasstalk taking the 11th race, a maiden claiming event at 5 ½ furlongs.

Nicks leads all trainers during Gulfstream’s summer meet with 31 victories while Gaffalione is the meet’s leading rider with 70 wins. Gaffalione is also the country’s top apprentice with 165 wins and earnings of $4.2 million.

Racing resumes Thursday at Gulfstream Park, in which Nicks will saddle horses in the sixth and seventh races. First post is 1:15 p.m.