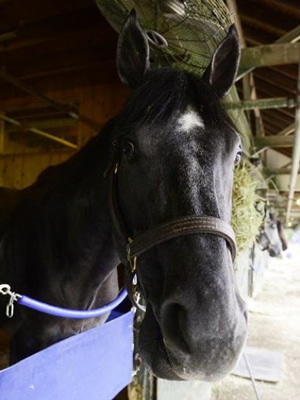 Refreshed and ready for a return to action, Mylute could be sitting on a big effort in Saturday’s $600,000 Jim Dandy Stakes at Saratoga.

The Grade 2 event at 1 1/8 miles is the traditional local prep for the $1 million Travers Stakes on Aug. 24, and has drawn one of the toughest fields of recent years.

When last seen, Mylute was a rallying third in the Preakness Stakes, which followed a very good fifth in the Kentucky Derby.

“I always knew that running in all the Triple Crown races was tough, but after running Mylute in two of them, I really have a tremendous appreciation for these horses that have won it,” said trainer Tom Amoss. “It is grueling. I’m not a proponent of changing it, and I think it should stay as it is. But wow, it is demanding. My horse has a great constitution, but he was worn out, so we knew we were going to get some time off and certainly these races come back at the right time.”

Amoss feels the Jim Dandy is the right spot for Mylute, who will be ridden by Rosie Napravnik, to prepare for the Travers.

Indeed, the last three Travers winners emerged from the Jim Dandy, as Afleet Express was third in 2010, Stay Thirsty first in 2011, and Alpha first in 2012 before his deadheat with Golden Ticket.

“He has been very good since the Preakness,” Amoss said. “But let’s make no bones about it, he’s a horse that needs pace to set up his late run, and I think the way the race is setting up he is going to get that.”

With Freedom Child and Moreno on hand, he certainly should get a solid pace.

Even though he made seven starts last year and won at six furlongs, Amoss has always viewed Mylute as a late developer.

“I thought the Preakness was his best race by far,” he said. “He was the only one that closed against a very slow pace, so I think the best is yet to come with him. Around the barn, he is as laid back and as kind as can be. He’s just a horse that’ll put his head on your shoulder, which is unusual for a colt.”

Belmont Stakes winner Palace Malice, who happens to be the only horse in the field with a victory at Saratoga, get his summer and fall campaign started in the Jim Dandy.

He had some ups and downs after his local score, but put it all together with a dominant victory in the third leg of the Triple Crown.

Freedom Child was badly beaten in the Belmont after his runaway tally in the Peter Pan.

Moreno, who won the Dwyer Stakes in similar wire-to-wire fashion, goes for his third straight win in the Jim Dandy.

Another stakes winner in the Jim Dandy is Vyjack, an impressive winner of the Jerome and Gotham last winter at Aqueduct.

He seeks a return to that

form after failing in the Derby and Belmont.