Stageplay Wins Rags to Riches, Mo Tom Prevails in Street Sense on ‘Stars of Tomorrow I’ 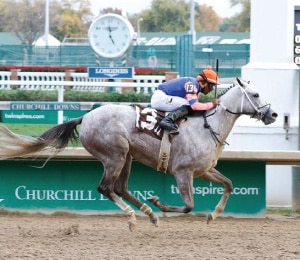 Mike Rutherford’s homebred Stageplay remained unbeaten in two starts with a 1 ½-length victory over Dream Dance in the third running of the $84,400 Rags to Riches on Sunday at Churchill Downs.

Sent off as the odds-on 3-5 favorite, Stageplay rallied under jockey Ricardo Santana Jr. to beat a dozen 2-year-old fillies and stop the teletimer in 1:36.58 for one mile over a fast track. It was her first test at the distance following a dominant three-length debut against maidens over 6 ½ furlongs at Keeneland on Oct. 10.

Covey Trace and Scatmeifucan battled for the early lead and led the field through fractions of :22.48, :45.89, 1:11.49 with Stageplay tracking about four lengths behind in the clear on the outside. Stageplay ranged into contention midway around the turn, took command at the top the stretch and held her rivals at bay in the final stages. Dream Dance and Family Tree rallied from behind but could not catch the winner.

“I think both of her races were very impressive,” Asmussen said. “I think she’s been very mature. She came from GoldMark [Farm]; they touted her and told us what a nice filly she was and how nice she acts and how her ability was. She came into the barn at Keeneland this spring and got a little break during the early summer and has had a really nice fall.”

A start four weeks later in the $200,000 Golden Rod (Grade II) on Nov. 28 is likely, according to Asmussen. The Golden Rod is part of the Road to the Kentucky Oaks series and will offer 10 points to the winner, 4 to the runner-up, 2 to third-place finisher and 1 to the fourth-place finisher.

Stageplay is a Kentucky-bred gray or roan daughter of Curlin out of the Valid Expectations mare Stage Stop.

“I think out of a nice mare, and with her being a half-sister to Mylute, stretching out shouldn’t be a problem,” Asmussen said. “She’s been thought very highly of since she hit the ground. We ran her back pretty quickly off her maiden race, but I did want to use this as a branch to the Golden Rod as opposed to just training up to it.”

The Rags to Riches is named in honor of the Derrick Smith and Michael Tabor’s winner of the 2007 Kentucky Oaks (Grade I) who was named that year’s Eclipse Award champion 3-year-old filly. Following her victory in the Oaks, trainer Todd Pletcher’s daughter of A.P. Indy defeated eventual two-time Horse of the Year Curlin to win the Belmont Stakes (GI) and become the first filly to win the third jewel of the Triple Crown in 102 years and just the third of her gender to win that race.

STABLEMATES TUSSLE IN 1-2 FINISH AS MO TOM EDGES TOM’S READY IN CHURCHILL DOWNS’ $80,000 STREET SENSE ON ‘STARS OF TOMORROW I’

It was clear deep in the homestretch that a 2-year-old Thoroughbred named “Tom” carrying the colors of G M B Racing would win the co-featured $81,750 Street Sense on Sunday’s opening day “Stars of Tomorrow I” racing program at Churchill Downs, but the in-house tussle was not decided until the final yards when Mo Tom held-off stablemate Tom’s Ready to win a length.

Jockey Corey Lanerie rode the Chris Richard-trained son of Uncle Mo, who collected his first stakes victory and returned $12.20, $5.20 and $3.40 as the 5-1 fourth choice in a field of nine 2-year-olds. The Dallas Stewart-trained Tom’s Ready, with Brian Hernandez Jr. in the saddle, paid $4.20 and $3.40. Express Flurry Racing Stables LLC’s Uncle Brennie, ridden by Chris Landeros, finished 5 ½ lengths behind the runner-up and returned $4.20 to show.

Mo Tom, who started from the rail post but made a seven-wide rally to win, covered the mile over a fast track in 1:36.78. The Street Sense was the second win in three starts for Mo Tom, who won his career debut at Ellis Park before he finished third in an allowance race at Keeneland on Oct. 8. The winner’s purse of $49,926 lifted the career earnings for Mo Tom to $73,126.

The Street Sense is a prep for the $200,000 Kentucky Jockey Club (Grade II), a 1 1/16-mile race for 2-year-olds at Churchill Downs on Saturday, Nov. 28. The Kentucky Jockey Club is part of the “Road to the Kentucky Derby” point series that will determine the field of 20 horses that will compete in the $2 million-guaranteed Kentucky Derby Presented by Yum Brands (GI) at Churchill Downs on Saturday, May 7.

Favored Discreetness, who encountered significant traffic issues on the backstretch and in the turn under jockey Jon Court, finished fourth in the Street Sense. The order-of-finish was completed by Cotton Town, My Majestic Flight, Junkers, Pinnacle Peak and Shogood.

Junkers, Shogood and Pinnacle Peak jumped from the starting to gate and engaged in a three-way fight for the early lead. Tom’s Ready settled just behind the leading trio while Mo Tom settled into seventh place in the early going. Mo Tom launched a rally on the far outside on the turn, while Tom’s Ready was shuffled back from fourth to sixth in heavy traffic and Discreetness was under strong restraint by jockey Jon Court in tight quarters along the rail. Mo Tom circled the field seven-wide at the top of the stretch to take command while stablemate Tom’s Ready swung out six-wide to chase the leader. The duo quickly cleared the field and Tom’s Ready chipped away at the two-length lead attained by Mo Tom in mid-stretch, but he could not catch his stable mate.

Siding Spring, who finished 10th in Saturday’s $2 million Sentient Jet Breeders’ Cup Juvenile at Keeneland, and Huntin’theholiday were scratched from the Street Sense.

Sunday doubled as Opening Day of the 21-day Fall Meet at Churchill Downs and “Stars of Tomorrow I” in which each of the 10 races was devoted to hopeful 2-year-old stars that have aspirations of trail-blazing their way to next year’s Kentucky Derby Presented by Yum! Brands and Longines Kentucky Oaks.

After dark days on Monday and Tuesday, racing at Churchill Downs resumes Wednesday with a 10-race program that begins at 12:40 p.m. ET. There’s a Single 6 Jackpot carryover of $5451.22 on the final six races.

COREY LANERIE, jockey of MO TOM (winner): “I thought the trip was good. I got him to the outside right at about the quarter pole and got a clear sailing. He just came on home. I think he proved best today. All along the owners thought he was a really nice colt last time. I was a little disappointed in his efforts but it’s a learning experience and he seems to be getting better. He didn’t fight the dirt. Down the backside I wasn’t having to encourage him after I sent him from the gate, he took me where I wanted to go. Last time he wasn’t sure of the dirt and wasn’t running down the backside.”

CHRIS RICHARD, trainer of MO TOM (winner): “We’ve thought very highly of this horse, he just needed a little bit of seasoning and needed more distance. It wasn’t really a surprise to see him go out and run as well as he did. So I give him a lot of credit, it’s more him than it is me, that’s for sure. We’ll discuss it with the owners but that [Kentucky Jockey Club] is a distinct possibility. The Uncle Mo babies are running all over the place and I don’t think you could ask for a better start for your freshman season. I think two turns is definitely within his capability. He’s got this big long cruising stride to him and I have always thought that the further he would go, the better he would get.”

BRIAN HERNANDEZ, JR., jockey of TOM’S READY (second): “We had a little unlucky trip turning for home, we got hemmed in to the inside of some stopping horses and they got the jump on us and beat us to the punch today and it definitely cost us.”

RICARDO SANTANA, JR., jockey of STAGEPLAY (winner): “She was the best filly in the race. I wanted to keep her out of trouble, keep her behind horses and teach her something different. The first time she won, she came from behind and she ran really well. She’s a nice filly. She can come from behind and she can be in front, she’s pretty quick from the gate. Turning for home, she was passing other horses to the lead nice and smooth.”

STEVE ASMUSSEN, trainer of STAGEPLAY (winner): “I think both of her races were very impressive. I think she’s been very mature. She came from GoldMark [Farm]; they touted her and told us what a nice filly she was and how nice she acts and how her ability was. She came into the barn at Keeneland this spring and got a little break during the early summer and has had a really nice fall. I think out of a nice mare, and with her being a half-sister to Mylute, stretching out shouldn’t be a problem. She’s been thought very highly of since she hit the ground. We ran her back pretty quickly off her maiden race, but I did want to use this as a branch to the Golden Rod as opposed to just training up to it.”

BRIAN HERNANDEZ, JR., jockey of DREAM DANCE (second): “The other filly is just a really nice filly. We were able to follow a couple horses and our filly got into a nice rhythm and took us around really nicely. We were just second best today.”

SELECT OTHER STARS OF TOMMOROW I QUOTES

BALDEMAR BAHENA (assistant trainer of Susies Yankee Girl, winner of Race 5): “She ran really well. We think that she’s a nice filly later. If we take things step by step she could be a nice 3-year-old. She’s by Blame, so she can definitely stretch out. We might think of running her in the Golden Rod. Why not? We think we would have a shot.”

CHRIS RICHARD (trainer of Unexplained, winner of Race 6): “He had been working really well going into the race. He just is not fast coming out of the gate and that was a concern of mine. He comes out; it just takes him a whole lot to get going. I told Florent [Geroux] exactly that – he’ll break good, he’s just not fast coming out of there. It takes him a while, but he sure had been working real well. I think he’ll work well if you’re just patient with him, just sit on him and let him do his thing. I think that the further this colt goes, the better he’s going to be.”

JOE SHARP (trainer of Tiznoble, winner of Race 7): “The horse is showing us a lot of ability in the morning but I knew there was probably a little more there when we put him on the grass. He definitely ran to his pedigree. We’re excited to get lucky for Dell Ridge and give the opportunity to have a horse like this. We’re excited for the future, it seems like it’s pretty bright.”