The Works | Whitmore ‘a bad man’ in the Derby 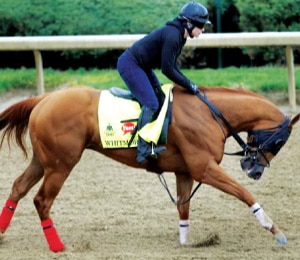 Look for “The Works” to sum up Kentucky Derby and Oaks training each morning from Churchill Downs, with insights and interviews on site leading up to the May 6 and 7 races.

Whitmore had just finished up his gallop Thursday morning, looking like a handful while swinging his head about during Derby training under the Twin Spires, when trainer Ron Moquett turned to walk back to the barn.

“He thinks he’s a bad man,” Moquett said. “I’m not telling him differently.”

The chestnut gelding, third last time out in the Grade I Arkansas Derby, has appeared a standout in the lead up to the May 7 Derby. While not yet a stakes winner, Whitmore hit the board in three straight Triple Crown preps at Oaklawn Park despite going five wide in the Rebel Stakes and sixth across the track in the Arkansas Derby.

The trips were difficult enough that Moquett figures his horse has already run 1 1/4 miles in a race, something the rest of the Derby field can’t say. There’s little doubting Whitmore’s conditioning coming out of those races.

“He’s happy,” the trainer said. “That’s the thing. I promise you we’ve kept the best weight and everything. He looks great.”

Whitmore is one of many contenders with a planned final workout more likely Friday than Saturday, when rain is in the forecast.

Moquett regularly stables at Churchill this time of year and in 2015 trained Far Right, his first Derby runner. Since leaving Oaklawn, he has noticed progress from Arkansas Derby winner Creator and that race’s runner-up, Suddenbreakingnews.

“Of the new ones I’ve seen, the most impressive to me is Outwork,” Moquett said of the Wood Memorial winner. “Mor Spirit’s beautiful, too.”

Moquett hasn’t yet seen undefeated favorite Nyquist in person. The colt is expected to arrive Saturday following his workout before the races Friday at Keeneland.

“I think he was obviously better at doing what we’ve been doing. Now we’re doing something else,” Moquett said. “If you go to a track meet and everybody’s running a different distance, the guy that’s getting beat at a half a mile and a quarter of a mile might be waiting to go a mile, because that’s what he’s good at.

“I’m optimistic that that could be us.”

Big-name worker: Trainer Todd Pletcher plans to drill his Derby contenders, Destin and Outwork, on Friday. First, he sent out the likely Kentucky Oaks favorite Friday. Rachel’s Valentina started behind workmate Caribbean, a 3-year-old maiden colt, and galloped out well in front while moving four furlongs in 47.80 seconds. The daughter of Oaks winner Rachel Alexandra will make her second start off a layoff on May 6.

Other fillies: Pletcher has two others possible for the Oaks. Mo d’Amour beat her company, Noble and True, while going the half in 48.20 seconds. Thrilled, a horse well outside the top 14 in points, continued wearing a pink saddle towel for her breeze Thursday indicating Oaks contenders. Grade I winner and older filly Curalnia finished evenly with her before galloping out in front.

Gallops of note: More than a week removed from his last workout, Mo Tom galloped Thursday under a tight hold from his exercise rider. My Man Sam didn’t seem to tire as much as his Chad Brown stablemate, Shagaf, while going twice around. And Brody’s Cause became a bit lathered up during his training but traveled well.

Noisy Gun Runner: It was most noticeable in his workout, but the Louisiana Derby winner breathes louder than most horses when moving. Jockey Florent Geroux says he’s always been that way. “If it was something new, it would be concerning,” Geroux said.