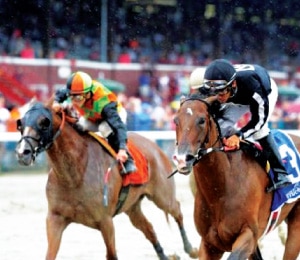 HALLANDALE BEACH, FL – After capturing Saturday’s Wasted Tears Stakes with Can’t Explain, Whisper Hill Farm and Ralph Nicks will look to win a black-type event together for the second week in a row in Friday’s $75,000 Hard Worker with Zamquick.

A 6-year-old daughter of Pomeroy, Zamquick is seeking her first stakes triumph in the five furlong turf event. She previously finished third in Gulfstream’s Ladies Turf Sprint in February and, in her most recent start, the Bougainvillea Handicap on July 18 in what was her debut for the Nicks barn.

“She came out of [the race] good,” Nicks said. “She’s doing good. We sent her back to the farm for a while and she’s just come back in, but she looks good and I think the race should set up well for her.”

A Florida-bred, Zamquick has found her niche at the five-eighths turf sprinting distance. After beginning her career switching between three different surfaces – turf, dirt and all weather – at distances from five furlongs to 1 1/16 mile, the chestnut broke through with a dominant seven-length victory in a five-furlong turf sprint at Churchill Downs in June of 2014 when running for trainer Eddie Kenneally. She has not run beyond 5 ½ furlongs again, capturing an allowance at Saratoga in 2014 and holding her own in stakes and allowance company in Hallandale, Lexington and Louisville.

Zamquick was transferred to Nicks, who also trains recent Ballerina (G1) runner-up Tap to It for Whisper Hill Farm, this summer, and in her first start for the barn the mare finished a gaining third, beaten 2 ¼ lengths, after rallying from off the pace while six-wide in the Bougainvillea. The performance encouraged Nicks, who sent the mare to GoldMark Farm in Ocala, a facility where Whisper Hill keeps many of their horses and where Zamquick has thrived, between races.

“We send her back and forth between here (at Gulfstream) and the farm, because she does well up there,” Nicks said. “She’s trained well. She needs to be a little more on the bridle than she was last time, but we expect a good effort.”

“The race should obviously set up for her,” he added, referencing the mare’s off-the-pace style of running. “R Free Roll will be rolling out there, and my other filly (Angie’s Prim Lady) will probably be pressing her a little bit or stalking, and it could set up for Zamquick.”

Angie’s Prim Lady, Nicks’ other entrant, is another relatively new addition to his shedrow. A 4-year-old daughter of With Distinction, she dueled on the lead and tired to seventh in the Bougainvillea Handicap after winning an allowance at Louisiana Downs and racing primarily on the Midwest Circuit for owner Keith J. Davis.

“I expect a big improvement with her,” Nicks said. “She’s put on weight and a lot of muscle since we got her and since her last race. She needs to be a lot more relaxed. Hopefully she’ll settle off R Free and have some finish.”

Averill Racing and Silver Oak Stable’s R Free Roll will likely be the Hard Worker’s pacesetter. A Grade 2 winner on dirt, having captured the 2014 Honorable Miss (G2) at Saratoga, the 5-year-old Rockport Harbor mare made her turf debut in Gulfstream’s Tiger Lily Handicap in June and came away with a ¾-length score. The Richard Averill homebred, known for her early speed, returned to the main track to contest the Princess Rooney (G2) on July 5, but after finishing fifth behind the multiple graded stakes-winning Merry Meadow, she will switch surfaces again.

Matthew Newman and Aventura Stable’s Perfect Step will contest the Hard Worker after notching three consecutive allowance optional claiming victories on the Gulfstream lawn. Claimed in July by trainer Peter Walder, the 6-year-old Congrats mare most recently led wire-to-wire in a starter allowance on Aug. 28. She has finished in the money in eight of 10career turf sprint starts.